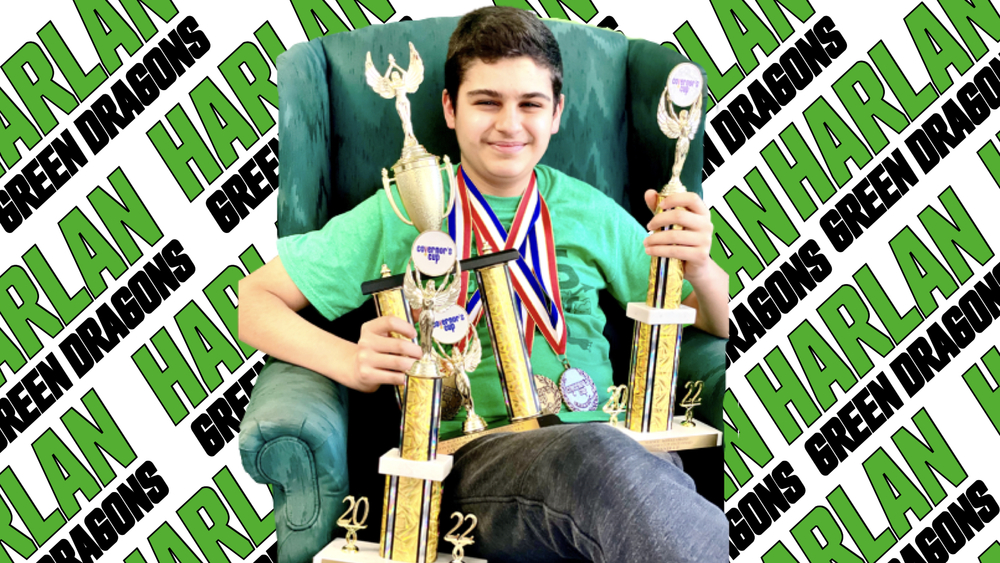 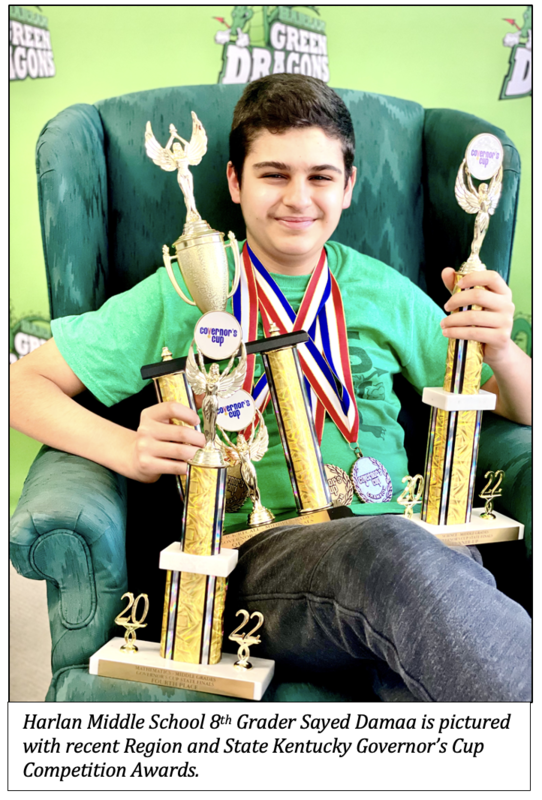 Harlan students and teams across all schools routinely advance to the highest levels of competition each year. However, none have been on the dominant path that current eighth grader Sayed Damaa is currently blazing. Sayed is the son of Dr. Georges & Jamile Damaa of Harlan and has been an integral part of the Green Dragon success over the past six years.

Sayed’s success has been a staple with Harlan teams since 4th grade. Over the course of the last five years, Damaa has achieved a remarkable run of academic excellence that will be difficult to match in years to come. As a member of the Harlan Elementary School Academic Team Sayed quickly found his path for success. A highly gifted student, particularly in Math and Science, as a 4th grader Damaa placed 2nd in Science at District and 4th at Regional competition while winning 1st place in Math at both divisions.

Since that time, Damaa has completely dominated the competition on his way to ten consecutive 1st place finishes in the Math assessment and seven 1st finishes in Science at both District and Regional competitions dating back to 2018. 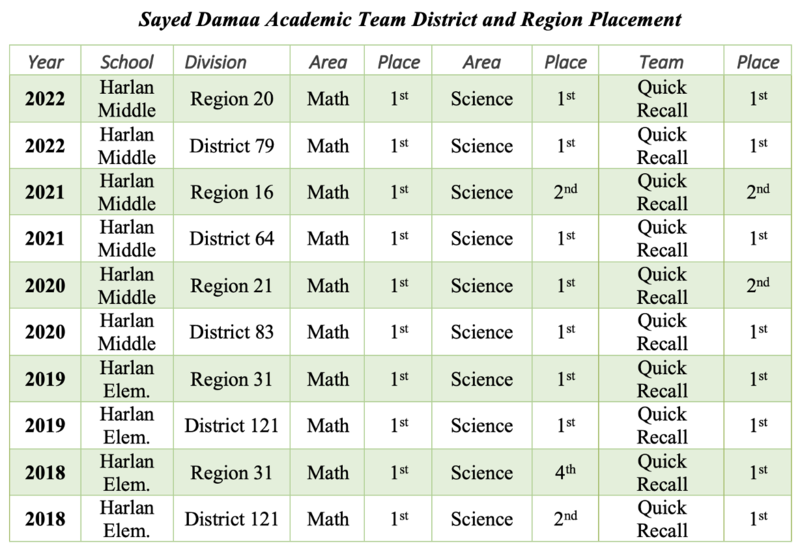 At the highest level of state competition, Damaa was two points shy of continuing his streak of first place finishes in Math at the State Kentucky Governor’s Cup competition recently held in Louisville, Kentucky. While there, he also added a 2nd place finish in the Science assessment.  He lost the top spot in Science at state on a tiebreak as both contestants answered 49 of 50 science questions correctly. The 2nd place in Science and 4th place in Math at the State level represent the highest individual finish of any student from Harlan County.

As part of the Quick Recall team at Harlan Elementary and Harlan Middle School, Damaa has helped lead his team to two runner up finishes and eight 1st place titles. During the 2022 State Quick Recall competition, Harlan finished 5th overall, another school and county record.

Harlan Middle School Academic Coach Chris Day commented on Damaa and his dedication to academic excellence, “ Sayed is what every academic coach dreams of having as a member of their team.  Hard working, dedicated, a team player, driven, motivated, and every other positive attribute of an academic team member, that describes Sayed Damaa to a tee.  Having Sayed on the middle school academic team the last three years has been amazing.  He has made it so fun and exciting.  I’ve truly been blessed to have him and I can’t thank him enough for making the last three years so special.

Damaa commented on the influence Mr. Day has had on his success, noting whenever he needs support or guidance he doesn’t have to look far, “I am thankful for such a great coach like Mr. Day. Whenever I need anything, he is always there for me and he is literally the best coach I could have, I am very thankful for him.”

During the 2020 school year and as a 6th grader Damaa competed in the Pine Mountain Chapter of the MathCounts competition where he secured 1st place and the overall top spot. As the overall winner he was presented with a Scholarship to the University of Kentucky for $12,000. The MathCounts competition is hosted each year by the Kentucky Society of Professional Engineers for students grades 6th-8th.

MathCounts Coach Cory Estep stated, “Sayed’s Math skills are superb! What makes him such a great Math student, and just overall student, is his ability to persevere with his learning. Sayed clearly wants to be the best that he can be, which is another thing that helps his classmates out as well. He is a thoughtful communicator who is able to teach his peers what he knows and help them understand as well! His compassion for learning, followed by his skills he has developed and his personality make him a joy to teach and be around!”.

While Damaa excels in the academic competitions, he is also an extraordinary overall student and classmate. Harlan Middle School Science teacher Melissa Howard commented on his love of learning, “Sayed displays a real desire to learn and to understand content on a deeper level. In and out of class, he is always ready to do more than what is asked of him and he is eager to share this depth of knowledge with his teachers and classmates.”

Damaa said he is looking forward to learning new content next year while working with Harlan High School coaches Rebecca Gross and Mike Bolton, “I will be concentrating on learning the new content my freshman year and by my sophomore year I should have a much better understanding of the High School content, I can’t wait to be coached by Mrs. Gross and Mr. Bolton.” Damaa credits his teammates and parents for pushing him to be the best, “my parents always push me to do my very best and getting to advance with my team to state has been a lot of fun.”

Superintendent CD Morton says the academic awards are just a piece of the dynamic puzzle that makes up Sayed Damaa, “Sayed is clearly a gifted student, but what makes him special is his humility. He is the epitome of a Green Dragon student, full of compassion, curiosity, kindness, and resolve. He always has a smile on his face and is kind to his classmates and pours his heart into everything he does. He is going to be the best at whatever he does and makes everyone around him better.”

In addition to his academic pursuits, Damaa is a member of the Harlan Middle School Football and Basketball team.